Another month, another challenge.  This month I got to pick the project I wanted to do.  I don’t know if that was a good idea or not.

My project was the Embroidered Portraits.   Which came from Country Living.

The first thing I did was pick a photo.  This took a long time.   I chose my oldest daughter, because well, just because she is beautiful and I had some up-close shots of her. 🙂 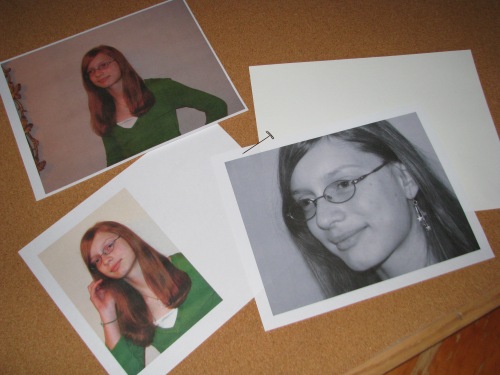 I decided on the black and white one.  I thought I would get the details I wanted on it.

Tape the picture on the watercolor paper, so that the paper will not move while punching holes.

Next step, marking the outlines I think will be nice.

After erasing some lines and adding more lines, I was satisfied.  Now comes the fun part, I get to poke holes in my daughter’s face.  JOY!  NOT!  I got real nervous at this point.  I didn’t want to mess it up.

I started thinking clearly after a few sips of wine.  This photo is just a black and white copy, printed off the printer.  If I mess it up, I can just print another one and raid my 2nd daughter’s art box for another watercolor paper.  See, wine solves a lot of problems.

I used the T-pen to make the holes to put the needle and thread through.  I think I did a pretty good job of it.  At least it looks good so far!

After the holes have been punched, I carefully removed the blue tape and the photo. All that is left is a white piece of paper filled with holes.

It’s at this point I realize I don’t have any black embroidery thread.  So, I put the paper away until I can get some.  I wake up this morning and realize, I still had not started the embroidery or even bought the thread for it!   Stopped by Michael’s bought some thread and got started on the picture.

Let me tell you, working on paper is a pain in the butt!  I am use to sewing on fabric, not this stabbing of the needle from the front and the back.  Ug… I had to turn the paper front to back every time I needed to put the needle through.  Annoying!

The other problem was I had to make sure I used all the holes.  There were a few places I had to add another hole just to make the stitches work right.

The eyes were another problem.  Making a solid pupil on paper with thread isn’t that easy, but I managed it.  I’m not too happy with the bridge of her glasses.  Don’t know if I can fix it by adding a few stitches on the left side.  Will have to look at it a while an consider it.

With the above problems, I think I did a pretty good job.

The next difficult piece will be at the ear and earrings on the right.  When I get this done, I’ll post the finished product.

Even though I don’t like the stabbing of the needle, I like how it is turning out.  Right now,  I say I have 3/4 of it nailed.  When finished, I’ll decide if I have really Nailed It or Failed it.

To see what other peeps are doing in this dumb idea of actually doing something from Pinterest, click on their buttons below.

This entry was posted in needle work and tagged embroidery, Nailed it/Failed it, PInterest. Bookmark the permalink.