I don’t know what is up with WordPress (probably my fault, but I am not going to admit it), but here is the missing post.

The H.L. Hunley was built in 1863.  Manned by eight men and is the first submarine to sink a ship, Housatonic,  in wartime.

The area where the crewmen worked is incredibly small.  The photo below is a replica that was used in a movie.  This replica is larger than the actual submarine.  Sir Husband look very comfortable, doesn’t he?

The size is only 48″ diameter.  The tallest crewmen was 6’1″.  Can we say claustrophobic?

It was once believed that the torpedo was attached to a string.  Once the torpedo was embedded into the ship’s haul, the submarine would reverse pulling the string and then setting off the torpedo.  It has been recently found that this is not the case.  The torpedo was detonated by a push button.  Just 20 feet or so from the ship.

It is unknown how the crewmen actually ended up on the bottom of the sea, but three possibilities are given during the tour. 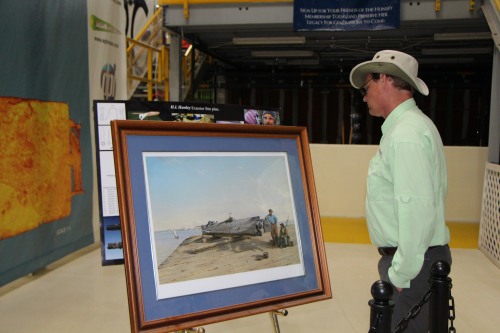 If you ever visit Charleston, SC, I suggest you take time to visit this museum.

They have even reconstructed the heads of the crewmen.  Creepy and cool all at the same time.

This entry was posted in Home. Bookmark the permalink.